Comet 46P Wirtanen appeared in the skies over Tasmania during the early weeks of December, and I decided to make the effort to get out and see/shoot it one incredibly fine evening (back on Dec 11 to be precise). 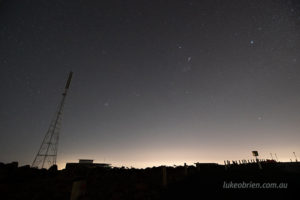 Comet 46P Wirtanen. The setting for the shoot – high above Hobart on Mt Wellington. December 11 2018

I decided to head up Mt Wellington – aiming to do a few city light shots at the same time (see previous post). The shot above shows you the setting for my comet spotting session that night. The city glow is substantial, and perhaps not ideal for the comet which was reasonable faint to begin with. Stargazers will recognise Orion and the Pleaides in particular in the shot above. The comet was almost directly “up” from the Pleaides. 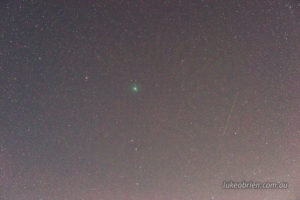 The settings used will indicate the brightness of the comet. I was using the Pentax Astro Tracer function to achieve pin point stars rather than star trails, and was very pleased with the results. The shots here were between 20-30 seconds, and particularly at 200mm focal length, would show substantial trails without the tracing function. 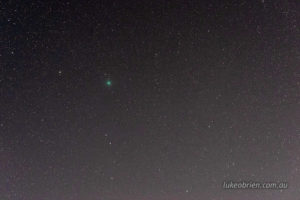 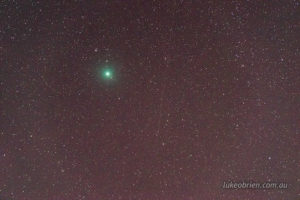 The brightness of the comet (and indeed all night sky objects) is measured in terms of “magnitude”. This comet was predicted to reach a maximum brightness of magnitude 3, and to put that in perspective, the full moon shines at magnitude -12; and the brightest stars (inc Venus) shine between magnitudes -1 to -4 (basically the lower the magnitude value, the brighter the object). The limit of naked eye visibility is approx 5-6, so technically this comet was just within naked eye visibility. For the record, I really couldn’t make the comet out with my naked eye, probably a combination of light pollution and from looking at the back of my camera in between shots and thereby ruining my night vision. A good explainer of the comet can be found here.