The Remarkable Cave is one of the many fascinating geological highlights on the Tasman Peninsula. Located at the Maignon Bay Lookout, it is a very short walk to view the cave, which on exactly the right angle looks a lot like the map of Tasmania! The sign in the car park says 15 mins but it is barely 5 minutes. From here you can also spend half a day exploring Brown Mountain and Crescent Bay. 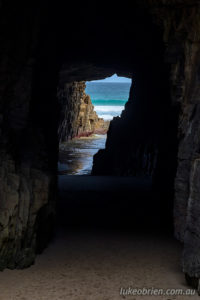 The Remarkable Cave on the Tasman Peninsula, viewed from just the right angle and like magic, the map of Tasmania appears at the end of the tunnel! 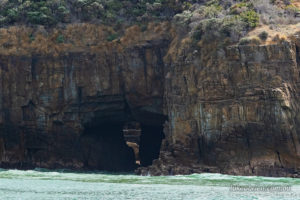 …and here’s the view from the other side, captured onboard the Tasman Island Cruise one time

I paid the area a visit recently, and photographed the cave for pretty much the first time since moving to Tasmania around 15 years ago. Better late than never I guess… Given it was low tide, I ventured into the cave and was surprised to find it is actually two caves, the second one being off to the left looking at the photo above. 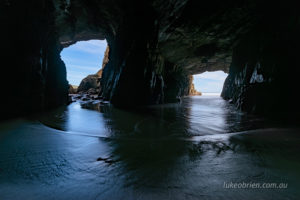 The two cave openings, visible after a short walk inside the cave. 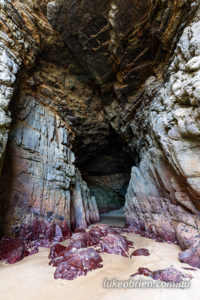 The walls and roof of the second cave 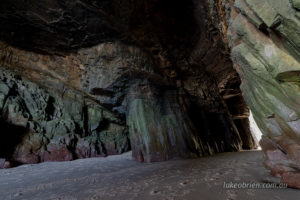 Inside the main cave, entry off to the right. 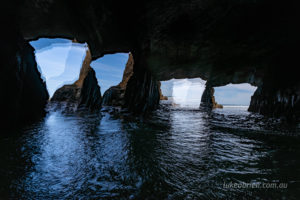 Tripod shenanigans – part way through a long exposure a wave somewhat bigger than the rest caused me to grab the camera and jump back a couple of steps. The result is kind of interesting isn’t it!

It’s important to keep your wits about you – and you certainly wouldn’t head down into the cave at high tide or when the waves were crashing. This particular day was very calm but even so, I had to jump back a few steps during one of my exposures (above) as one wave came a little too close for comfort!