As I mentioned in a previous post, I am now the proud owner of a drone, and last year I spent a bit of time getting to know it and would like to share these Tarkine drone photos with you. 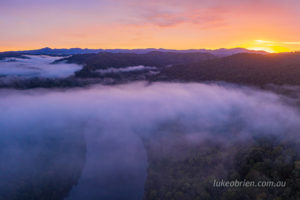 Sunrise from above the Pieman River. Amazing to get up above the early morning mist.

It is fascinating getting to know the drone and the potential for new images it endless. At ground level there was a thick mist but 120 metres up and the timeless Tarkine landscape was revealed in all its glory 🙂 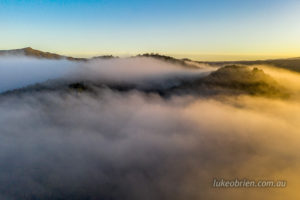 I am using the DJI Mavic Pro 2, and it is really interesting comparing the image files of the drone compared to the 36 megapixels I am used to with the full-frame Pentax K1. The shadows are really quite messy when underexposed so really pushing exposure to the right is important. In fact the image files seem to handle highlights extremely well.

It is also interesting to look straight down. The canopy of the Tarkine rainforest is quite mesmerising. During the spring (when these shots were taken) the myrtle beech trees were displaying their new growth of leaves which are a stunning orange-red, kind of like a reverse-autumn thing. If you look closely at the image below you will see a few orange tinged trees 🙂 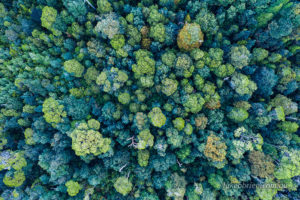 The afternoon provided some different lighting and opportunities. One afternoon was quite grey and cloudy… 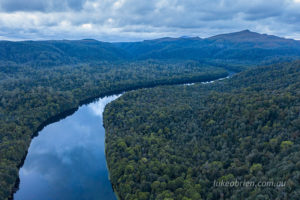 …the other was clear and the golden light of the late aftenoon was stunning from the aerial vantage point.

I hope you enjoy the shots 🙂