Airglow – the other night lights

Often when out chasing the aurora I notice a weakish glow on the back of the camera which at first glance kind of sort of looks a little aurora-ey, but at the same time sort of kind of doesn’t. It is completely invisible to the naked eye, but can be a reasonably strong orange in camera. Sometimes pale green. It turns out it is called airglow. 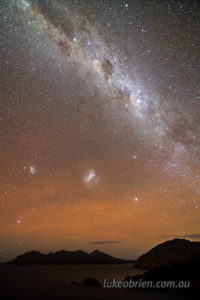 Orange airglow above the Freycinet Peninsula on Tasmania’s east coast

Airglow. The other night lights. It can actually be quite striking, as some of these photos show. But what is it? I have always fumbled for a vague explanation when out with guests, but it is definitely not an aurora, and while sorry to disappoint, it is important to be accurate! 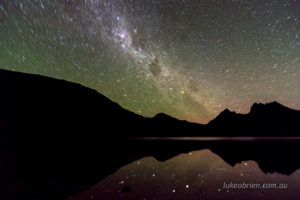 Airglow shares some characteristics with the aurora – especially the colour structure. The colour of the aurora and of airglow depends on what molecules it is interacting with, the most common being oxygen. The height in the atmosphere of the interaction also influences the colour produced. 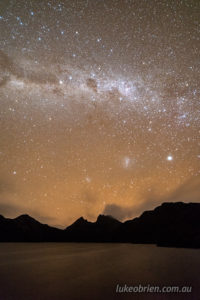 The main difference is that the aurora is formed by magnetically charged particles in the solar wind interacting with the earths magnetosphere. The aurora then produces its amazing lights as it moves and shimmers along the magnetic field lines in the polar or high latitude regions of the earth. 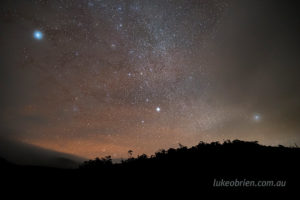 Airglow however is caused by the continuous bombardment of the atmosphere by UV radiation from the sun. To cut a very long story short, oxygen in the atmosphere absorbs the energy during daylight hours and releases it weakly during darkness. Airglow is visible at all latitudes, and without any extra special involvement of the sun (such as solar flares). 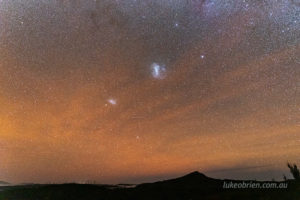 This is only part of the story of course, and dramatically simplified. Furthermore, there are also phenomena called dayglow and twilight glow just to complicate things a little more! 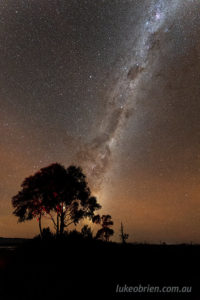 Another one over the Tarkine

I found a lot of this information online. Here and here are a couple of the articles I read.