Back in October I was the organiser for a group of US photographers for a 14 day trip around Tasmania. We criss-crossed the state enjoying sunrises, sunsets, ancient forests and all those stunning sights Tasmania is known for. 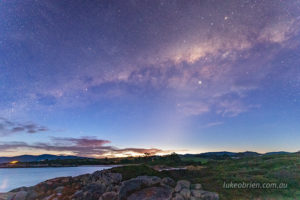 Our last port of call was the Bay of Fires where as luck would have it we were blessed with a stunningly clear sky – and with the possibility of an aurora in the mix we headed out for a night shoot to finish off the trip. 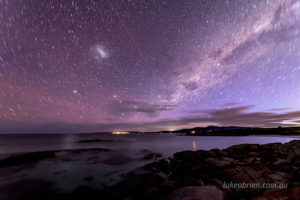 The Milky Way was stunning. Low in the western sky along with the Magellanic Clouds is was a beautiful night for it. Plenty of satellites crossed the sky too. I am quite sure also that the significant glow right below the core of the Milky Way is the “Zodiacal Lights” which it seems are in fact visible in the western sky at this time of year (October) in Tasmania. 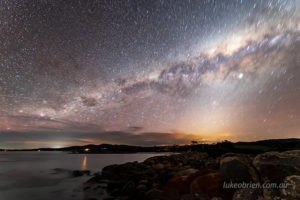 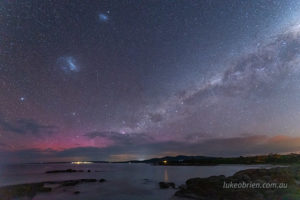 Faint pink aurora over the Bay of Fires. The only clouds in the sky and they were right along the southern horizon!! Grrr…

…well technically yes it did, we caught the very top of a pinkish glow above literally the only clouds in the entire sky which had parked themselves right in front of the southern horizon! The rest of the night sky in all its glory, and a single row of clouds blocking a big part of our aurora. I was taking it all kind of personally by this stage, but that might have just been a lack of sleep 🙂