Shooting the sunrise can be one of the most enjoyable aspects of landscape photography. Being up before everyone else really awakens that sense of adventure – setting out in the dark and fumbling around with a head-torch to find your location and get your gear set up.

More significantly, experiencing the pre-dawn silence and watching the natural world in action – the sun rise, the waves crash and the clouds skid across the sky – is a nice reminder of the important things in life as modern life gets busier and busier, and sadly, more and more disconnected from nature. 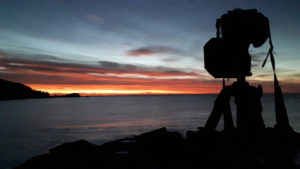 The scene very shortly after arriving, almost an hour prior to the actual sunrise itself!

For this shoot, I arrived at Sleepy Bay in Freycinet around one hour prior to the sunrise to see an intense red already prominent across the eastern horizon. Indeed my first shots of the morning were the most intense as the colour faded well before the sunrise. 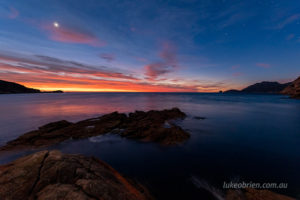 Earlier in the morning, in fact basically the first shot I took. Venus is the prominent “star” in the top left.

I have noticed lately that despite having been to Freycinet many, many times over the years I have in fact shot Sleepy Bay only once or twice before, so lately I have been keen to add some new Freycinet scenes to my collection-visit and this morning was an absolute beauty.

As the morning wore on, the fiery reds waned and became a lighter pink. The Hazards caught a little bit of the glow but basically the main part of the show was over, but what a show it had been 🙂 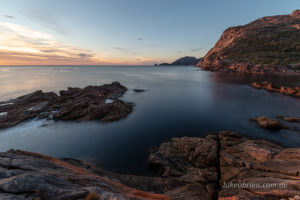 The last shot of the morning, taken an hour after the first. The light has completely changed now.