Tasmania has been experiencing some terrible bushfires this summer. Bushfires are of course nothing new or even unusual in the Australian bush however it is incredibly sad that fragile alpine ecosystems and rainforests are slowly starting to succumb to a warming climate. Just as the Great Barrier Reef seems to be on the way out, these precious and utterly unique landscapes in Tasmania are unlikely to see out the 21st century, the first century of the “Anthropocene”. 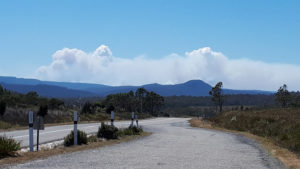 The major fires of this summer started in late December 2018 and in mid January 2019. They were ignited by so-called “dry lightning” thunderstorms – lightning storms which are accompanied by basically no rain – a phenomenon that was basically unheard of in Tasmania prior to the year 2000. Thousands of lightning strikes peppered the tinder dry bottongrass plains of south west and central Tasmania and through the tall eucalypt forests of the Arve Valley. At one stage almost the entire length of the Huon River was alight, meaning undoubtedly many ancient Huon Pines would also have been lost. 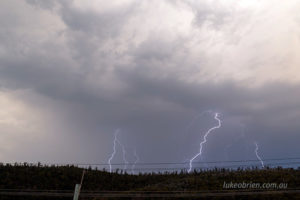 Lightning strikes over the Meehan Range east of Hobart on January 15, 2019

There is no place for pessimism or nihilism of course but unfortunately the political discussion over the environment in general, and climate change in particular, really is tragic. No one single event – be it bushfire (in summer or these days even in winter), cyclone, drought, flood, heatwave, glacier melt, mangrove dieback, coral bleaching, Darling River cod deaths, Pencil Pines burning in alpine Tasmania – or any combination of these – can specifically be attributed to climate change but how many “unprecedented” and “record breaking” events can the human race keep shrugging off as if everything is fine and its all just some sort of coincidence? And we should keep in mind perhaps the greatest coincidence of all is that all of these outcomes have been the subject of warnings and predictions by climate scientists for decades. 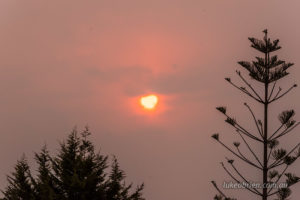 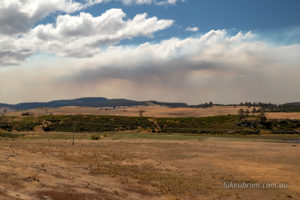 Smoke from the Central Plateau fire seen from near Colebrook, Jan 27 2019

Just three years ago Tasmania lost a great deal of alpine areas around Lake Mackenzie, and even parts of the Tarkine rainforest burnt (around Wes Beckett falls and Rapid River). That was only 3 years ago. It is now being reported that this summers fires burnt around 3% of Tasmania including fragile/non fire tolerant species, with the dampness of the rainforest environment in most cases serving as a natural fire-break.

In future years, in a warming and drying climate, it is certain that nature’s fire breaks will not be enough.