Grants Point is another stunning photo location in Tasmania’s Bay of Fires region. I spent a night here recently and caught a sunset/dusk and sunrise/dawn that were (literally) night and day in terms of results. 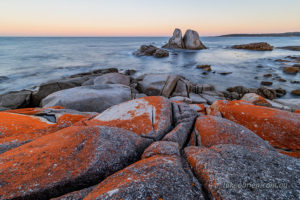 Late afternoon/dusk at Grants Point in the Bay of Fires

The dusk shoot was under an utterly cloudless sky. This location faces east, so I wasn’t here to shoot the sunset itself, but was hopeful of some nice pink hues (caused by the earth’s own shadow as the sun sets, known as the “Belt of Venus“) and some long exposures. I got both 🙂 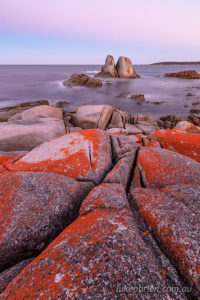 Grants Point in the Bay of Fires and the dusk “Belt of Venus” colour scheme.

As the sun wasn’t part of the equation, exposure was quite easy, and the orange rocks really popped in the even light. The morning was to provide some very different results… 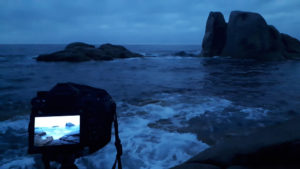 “Behind the scenes” – seeing what my camera sees

I awoke to complete cloud cover, not what I was expecting after such a clear dusk. However, I loved the results – a steely grey dawn, almost surreal in fact in the pre-dawn twilight. The long exposures were a treat 🙂 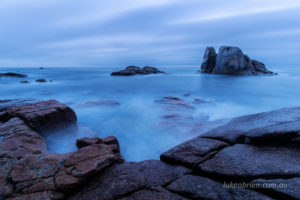 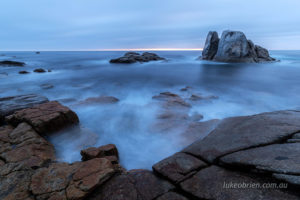 A little later on, 60 second exposure as the sun tries to find a way through the thick clouds.

Awesome location and glad to be getting out and about a bit more regularly after a serious leg injury last year – expect more new shots more regularly this year!