Mycena interrupta, otherwise known as the Pixies Parasol, and maybe even Ol’ Blue Eye might catch on, is almost the poster boy of Tasmanian fungi, and for very good reason. 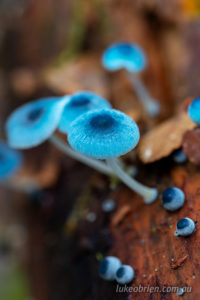 Mycena interrupta, on a fallen tree in the Timbs Track/Twisted Sister Track area.

This fungi is easy to identify although it is quite small – max size around that of a 5 or 10 cent piece, but it is often smaller. It is often growing on fallen and rotting wood, and every now and then you will get lucky and find it on a small enough piece of wood that you can position it where you like in order to get a good photo. These shots were on a fallen tree, so I wasn’t able to re-position anything, however, I was able to lie down on the ground and make myself comfortable as I lined up the shots 🙂 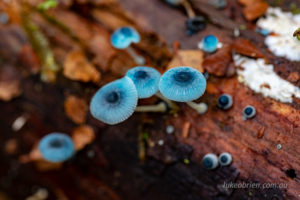 A large part of the tree trunk was covered in the fungi. This was just one little clump.

These photos were all taken with my Pentax K1, and the 100mm macro lens. The K1 has a fantastic mode called Pixel Shift, which takes 4 exposures, each one shifting the sensor by the width of 1 pixel in order to create an enhanced resolution and colour-rich image. You can read more about it here, but for the purposes of this particular blog post all I can say is it is fantastic for macro work. The detail in the cap of the fungi is nothing short of astonishing. 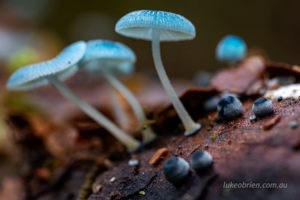 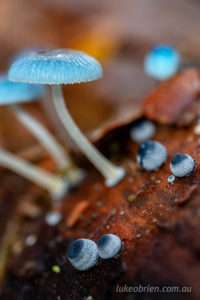 The other thing that is important is a flexible tripod, so you can position the camera in awkward positions relatively easily. A tilting screen is invaluable in this situation too, as you can see in the shot below: 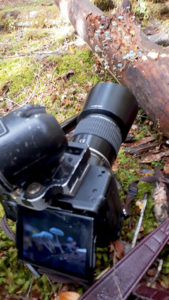 Photographing the fungi – a flexible tripod is an important asset!

These shots were captured with the camera itself only a few centimetres off the ground, so spreading the tripod legs low to the ground, and being able to re-position the main (vertical) bar of the tripod to a horizontal position is essential. I use a Manfrotto 190XPROB tripod for this.