Last night we were blessed with stunningly clear skies and a nice little bit of aurora action, so I ventured out to South Arm where I have shot before, this time hoping maybe to land the bioluminescence and aurora double. As it turned out there was no bio but the aurora appeared as a very faint glow, and for a while some floodlit fishing boats (I assume) got in the way but nevertheless, the Milky Way and Magellanic Clouds looked amazing and all in all it was a very pleasant shoot. Here are some of the shots 🙂 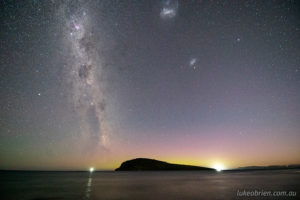 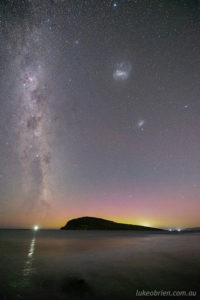 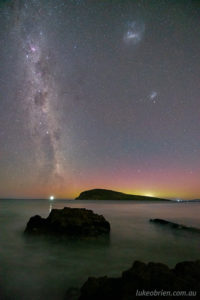 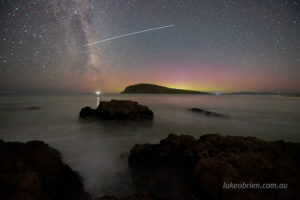 90 second flyby of some satellite. Captured with the Pentax K1 astro tracer function (to keep the stars as spots rather than trails) 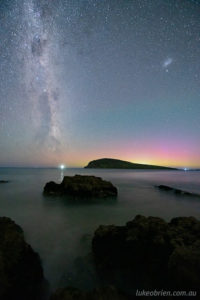 Nice little bit of pink in this one 🙂

I get asked lots of questions about the aurora at Salamanca Market and during workshops, so thought I’d share a bit of the wisdom here for you as “aurora season” could very well be getting started again:

First of all – what do I mean by aurora season?

What is the best time to see it?

Can the aurora be predicted?

What signs do you watch for to know an aurora will happen/is happening?

Do I run tours for the aurora?

Hope this info helps in your own aurora chasing in the months and years ahead!