Depending on the direction you have walked from, South Cape Bay is either the reward for a nice and mostly flat two hour walk from Cockle Creek to Australia’s most southerly viewpoint or the end of a grueling week in the wilderness along Tasmania’s lonely and remote south coast. 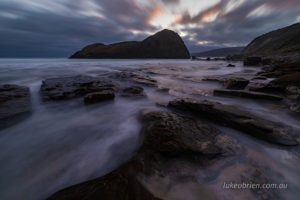 For me recently it was the former 🙂 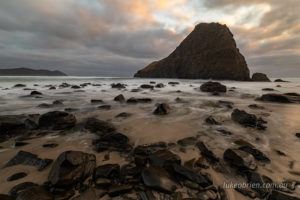 Our goal was to revisit Lion Rock and spend a night at the great campground tucked away in the dunes there. The walk in from Cockle Creek was fine. The first part is around 40 mins through the forest then a good hour or so of mostly flat and boardwalked terrain followed by another 20 minutes or so in the coastal scrub before the clifftop views open up. 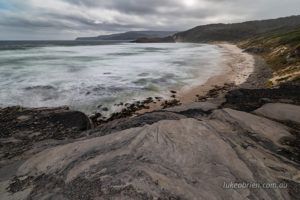 Your first views of the south coast from this cliff top. Lion Rock is at the end of the beach.

You come out on a pretty stunning rocky shelf with great patterning in the rocks, as well as views to South East Cape one way and Lion Rock and beyond in the other. The day we walked in was quite overcast and I got some nice moody shots of dark clouds and crashing waves from the clifftop. 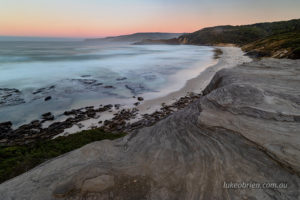 Dawn from the same rocky outcrop.

Lion Rock is only 15 mins or so from here so we went and set up camp, had a cup of tea, then waited for dusk which again resulted in some dark and stormy images. 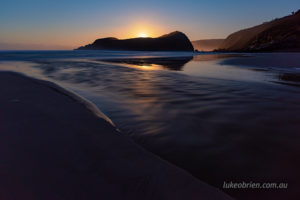 The next morning I woke early to find a nearly full moon setting right over the sleeping Lion and managed to get a couple of shots before it disappeared completely from sight. But although the moon itself was now hidden from sight, the glow it cast from behind Lion Rock a short while later was very special indeed. 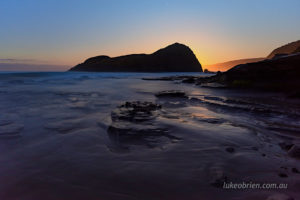 This day was a complete contrast to the previous with stunning blue skies, so it was an extremely productive 24 hours in the bush – and I loved every minute 🙂 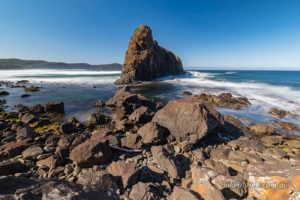 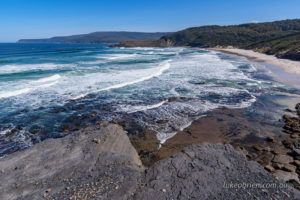 Final views before heading back to Cockle Creek