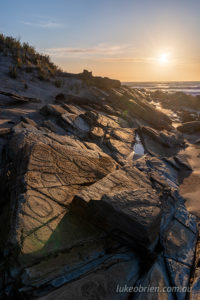 We visited the north west including Arthur River recently and dropped in on the Parks and Wildlife office where we got some incredibly helpful directions on finding them and headed out for sunset at Sundown Point over the petroglyphs. 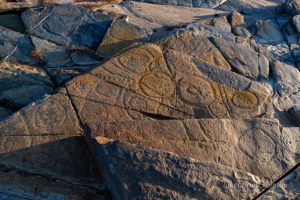 The Tarkine coast is well known for wild and rugged costline and we walked close to 30 minutes past all sorts of jagged rocks and rocky headlands before finding the right spot. I shot them in the late afternoon light and shot the sunset too before we got back to the car. 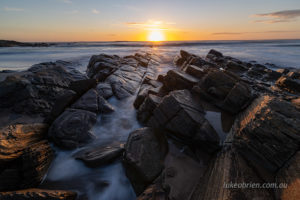 Sunset at Sundown Point on the Tarkine Coast

It was quite a clear night so “sundown” was a more accurate description than “sunset”… It was nice literally seeing the sun drop behind the horizon though – I am not often on the west coast during such fine conditions! 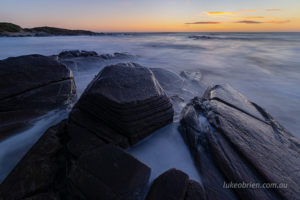 Sunset at Sundown Point on the Tarkine Coast 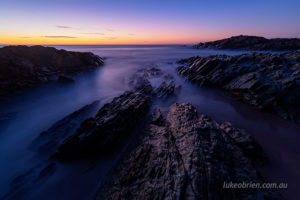 Dusk glow and incredibly still seas. Not what you’d normally expect from this bit of coastline!

We took a very slow and careful drive back to our accommodation at Arthur River, as there were wallabies and pademelons all over the place. We even saw one Tasmanian Devil and I certainly don’t want to be responsible for  knocking any of those little guys off!