This shot has been a little goal of mine for a while now – just a nice, calm shot of the city lights including the Tasman Bridge under the imposing backdrop of Mt Wellington. I wasn’t after a flashy sunset, and I wanted calm weather and clear skies, which we have had in abundance recently across Tasmania. So last night, I zipped down to Montagu Bay after sunset, waited for the blue hour to kick in and snapped away 🙂

For those who don’t know, the blue hour is basically just after sunset, or just before dawn for that matter, and in particular on clear days, a beautiful deep blue sky is usually the result. Last night there were no clouds at all, and very little wind and I thought it could be a good opportunity to scratch this particular itch – I’ve been after this shot for a fair while now and just haven’t gotten round to it… 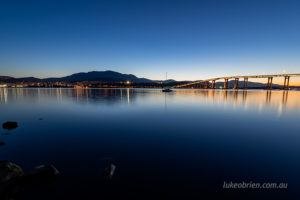 Earlier, and wider (15mm) shot. Wasn’t bad, but not quite what I was after…

These shots were taken around 6:00 last night, around 40 minutes after sunset. I shot a couple of shots at 15mm, but then settled on 18mm. The 15-30mm produces some beautiful star bursts around bright lights, right across the frame. Here’s a crop. 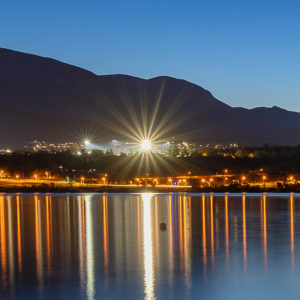 All in all very happy with the results of the short trip. And in answer to the question I know you are all asking, yes, it is available as a print in my new online store  🙂