Photographing the ghost mushroom – Omphalotus nidiformis – has been a goal of mine for ages, and last night I finally ticked that box 🙂 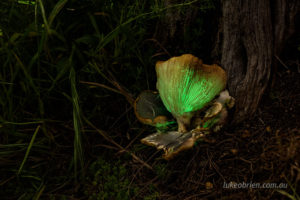 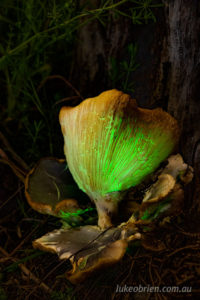 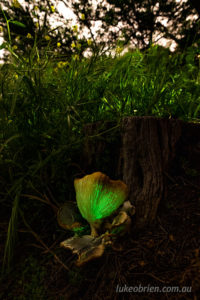 This ghost was glowing away in Hobart last night.

During the coronavirus lockdowns across Tasmania in autumn, my eyes glowed green with envy as dozens of ghost mushroom photos filled the “Tasmanian Fungi” group on Facebook. It was described as the best season ever for ghost mushrooms, particularly in the north of the state around Devonport and LaTrobe, and I despaired that I would never get to find one myself. Fast forward to a wet 2020 spring and the only thing glowing green right now is this specimen from last night! 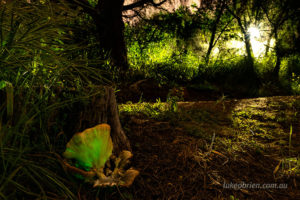 I stopped down for this shot (to get a little star-burst effect from the street light) which resulted in a longer shutter speed of 90 seconds.

The glow is faint, but very noticeable to the eye, even with the nearby street lights in this location. If you were in a completely dark location away from artificial light, and there was than one mushroom glowing, I daresay it would actually be fairly bright to the eye. I’ll keep looking for them – like the aurora, once you’ve seen it once, it only whets the appetite for more… 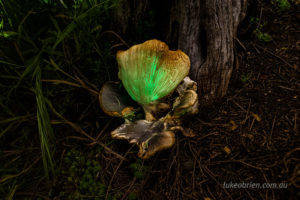 The ghost mushrooms are large and quite easy to spot during the daylight hours. Far better to locate them during the day then return at night rather than stumbling around in the dark hoping to find the glow 🙂 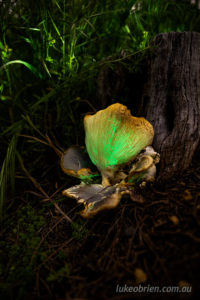 Most of these shots were taken with a reasonably high ISO (ranging from 1000-2000) and a shutter speed of between 10-30 seconds. Focusing was the important bit as of course it is dark. It is best not to shine bright light directly on the ghost mushroom but if you can add a little bit of sidelight, enough to allow you to focus, then cut the light you should be OK.