There is a great deal of hullabaloo in the mainstream media about the very high likelihood of an aurora this week. Is the fuss justified? There is absolutely a chance, in fact the photos decorating this blog post were all taken on Tuesday night (May 14) and are in fact the first aurora I have shot in ages. That is not to say there have been no auroras in ages, its just I haven’t gotten out to see one for a long time… 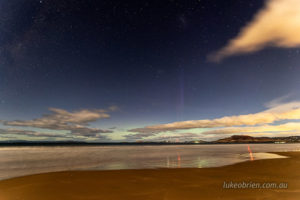 Why the special interest today however? Even the breakfast TV shows were in on the action, earnestly advising people to get outside between 22:00 – 02:00 for a dazzling display. First of all, there is in fact no way to predict a specific time that the aurora will appear. This is a question I get asked a lot – at Salamanca Market for example. The aurora is caused by solar activity, basically an explosion (solar flare or similar) or an enhancement of the solar wind, which then hits the earth and results in an aurora. When these will happen is of course utterly unpredictable, with the earth basically in the firing line of the solar wind, and the aurora appearing whenever the solar wind hits. 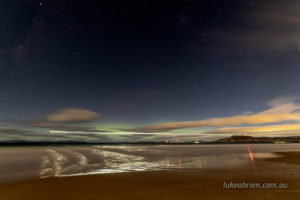 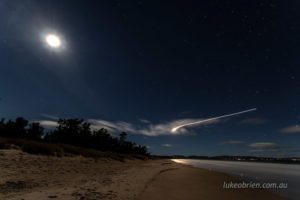 …followed shortly later by a helicopter. It was all happening at Seven Mile Beach! (Moon top left)

These shots are a great way to highlight the point. On Tuesday afternoon (Tasmania time) the solar wind hit the earth and wherever it had been dark it would have been a great display (there were some stunning pics from Antarctica). I went out right on dark but by then the geomagnetic storm had basically passed, and all I was privileged to see was one solitary beam making its way across the heavens.

Another factor hindering the aurora this week is the nearly full moon. As you can see from these shots, the full moon makes photos appear like day time, even at low ISO such as 400-800. If this week were new moon, the display would have been much more impressive but as it was I’ll just have to be content with my first little beam in a long time. 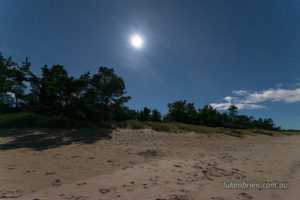 3/4 full moon lighting up the location. Not good for the subtle glow of the aurora…

So in the end the mainstream media are not wrong in stating an aurora sighting is possible this week, but they could say it quite often really. Maybe they were trying to take our collective minds of the election and if that is indeed the case then good on them I say. There should be more reporting on wonderful natural events all year round. Maybe they’ll start covering fungi season in Tasmania’s great forests next 🙂