Lindisfarne is a very scenic suburb on Hobart’s eastern shore. I took advantage of a recent stunning blue sky day to send up the drone and have a look around. 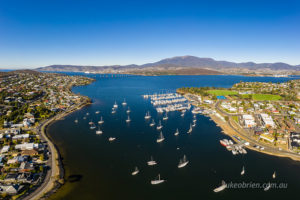 The drone has a few panoramic modes. The shot above is in fact 9 single images (three rows of three) combined to allow a wider field of view. Below is a crop of a 27 shot panorama, which is basically a 180 degree pano!

I only did a short flight, basically above the bay including the yacht club. I wanted to include the Tasman Bridge without it ending up too small or lost in the background. I made a couple of different compositions before “stretching the legs” a little and zipping off closer tot he bridge. 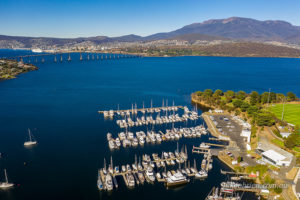 I spent a short bit of time up above the bay including the yacht club. I didn’t want the Tasman Bridge to be too small in the distance. I made a couple of different compositions before “stretching my legs” a little and zipping off closer to the bridge.

Above – this is a crop of a 180 degree pano, just showing the Tasman bridge and Mt Wellington. Below, the full 180 degrees captured by the drone.

Blue skies and drone photography are a good match!